550 guests packed the Manchester Suite at Old Trafford on Thursday evening (30 April) for our biennial fundraising dinner with David Walliams. The packed event at Old Trafford was sponsored by Beaverbrooks whose head, Mark Adlestone, is also our chairman.æ Mark recently receivedæ his 5th award as Sunday Times Best Leader.

Walliams was happy to mingle with Fed staff and guests:

The appeal on the night attracted donations and pledges in excess of £1m.æ Our delighted Treasurer, Bernie Yaffe, said

“This stands us in good stead to achieve our overall target of £1.6m which represents our annual operating deficit”.

Guest of honour, Walliams is well-known as a charity-fundraiser, actor, best-selling children’s author and Britain’s Got talent judge.

He joined an illustrious list of celebrities who have previously been guests at our appeal dinners. They include Sir Bob Geldof, Joanna Lumley and James Corden. He said,

“I am  very proud to be associated with such an amazing charity. I’m staggered by the breadth of its work and the number of people it helps. I hope my attendance contributes to this being a very successful event and that the money raised will go a long way to helping The Fed maintain its services over the next two years.”

Guests were addressed by The Fed’s Chairman, Mark Adlestone, who spoke of how the Fed is referred to as a “flagship organisation”.

“Why is that? …because our standards are high, our standards are excellent. We have smashed the traditional concept of the old home and created an inter-generational site where the old and the young are together in one vibrant place.”

But he made clear the distinction between raising the ring-fenced capital which enabled the creation of the new communal hub at Heathlands and the aim of the evening:

“to raise money for …services that are woefully under-funded so that we can continue to help those people who need us.”

CEO, Karen Phillips, introduced a short film highlighting the charity’s work through three stories as told by the service-users whose lives have been dramatically improved, if not saved, with The Fed’s help.æ She used the opportunity to reassure:

“Whatever changes are ahead, you can bank on us to be here, lobbying for what people should rightfully receive and fighting their corner; making sure that we provide as much as we can to as many as we can.”

The Appeal was made by Ruth and Mark Jackson, parents of a child with special needs, who appeared in the film. They described their devastation and terror at the realisation that their child had special needs and how as she got older,

“The gap between her and her peers grew wider; she could not form friendships. I was heartbroken for her and for me. I began to feel like an outsider around the other mums.”

“the help and assistance that we have received, and continue to receive from The Fed, has been life changing…. lifesaving.
And, we are just one example from one area of the Fed’s services. One family who is benefiting massively from this wonderful organisation.”

Walliams was interviewed by BBC Radio 4 host, Paddy O’Connell,æ conceding, with regret, that Matt Lucas always “made a much more attractive woman” than he.

He is pictured below with O’Connell and our CEO Karen Phillips:

Showing a clip from the Little Britain’s “Computer says “No!”” sketches he recalled that the inspiration came from his days before fame when he went to the bank for a loan.

He and then “applied his comic genius” by switching the “yes” to “no” giving birth to one of the series most popular catch-phrases.

Referring to Mel Brooks as the “God of Comedy” he observed how he at times regrets not being Jewish because he misses some of the nuances in the humour.

And the best thing about becoming well-known?

“Getting to meet the people you admire -when we did the Little Britain live show I was told one of the Beatles wanted to meet me and it turned out it was one of the main ones! Paul McCartney! And then recently I interviewed Michael Palin and I was thinking “How did I get here from being twelve and watching Monty Python on the telly?”

As one of the biggest selling children’s authors, Paddy quizzed him about writing things that are a bit “dangerous to children”.

“When Little Britain was being shown loads of kids who loved it but weren’t allowed to watch all of it and were sent to bed. I wanted to write stuff for children which that had something forbidden about it  something you’d read under the covers in the dark, to encourage them to read, especially boys”.

Nowadays as a judge on Britain’s Got Talent he enjoys meeting some “completely talentless people” such us one contestant who ate live cockroaches and sparked the idea for the character Burger Man Burt – the dastardly villain in his children’s book “Ratburger”.

But just as much he loves meeting people who do have really great talent and singling out Jack Carroll, “the mini Peter Kay” and 14 year old 2013 runner- up with cerebral palsy, known for his self-deprecating routine.

And putting aside his multiple achievements as writer, actor, comedian and judge, David was keen to talk about his fundraising efforts, showing a clip of him emerging exhausted from the sea after swimming the channel for Sports Relief.

He also recalled traveling to Ethiopia to film for Comic Relief and the impact of meeting “real people”, (such as the Heathalnds Village residents and staff whom he is seen with below) as opposed to reading statistics.

He commended those who support The Fed:

“That’s the society we all want to live in – where we help each other” ending his interview with, “I always say we have two hands – one is to help yourself and the other is to help others!”

And a few more photos… 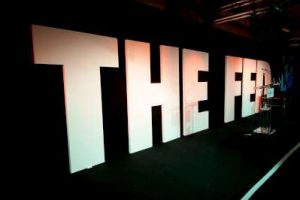 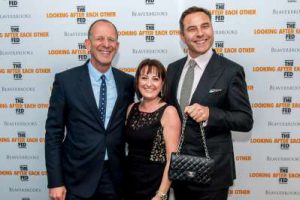 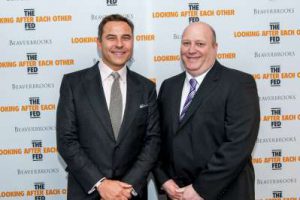 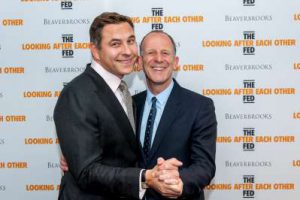 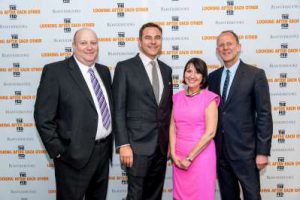 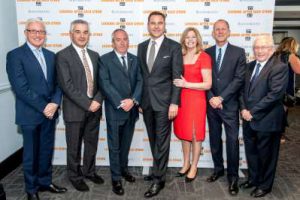 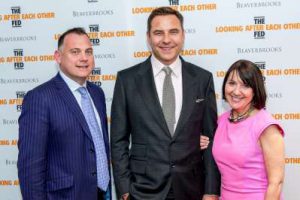 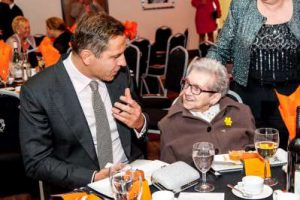 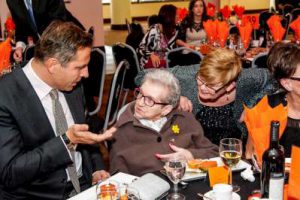 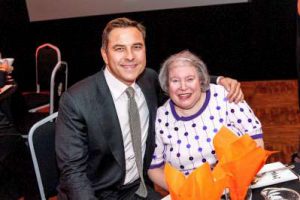 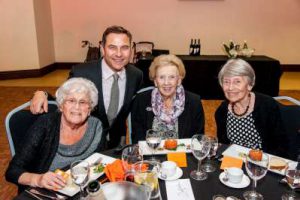 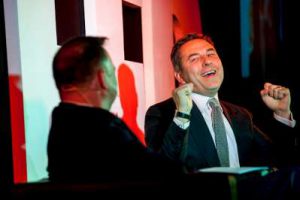