The Fed has always had a strong association with local Jewish schools and nurseries with young children getting involved with us in all sorts of ways:

North Cheshire Jewish Primary 6 pupils host “coffee-stops”- preparing and serving afternoon tea for some of our older, isolated clients and providing entertainment too.

School choirs visit residents at our care home, Heathlands Village, at different times throughout the year. And many local children, from tiny nursery tots upwards, take part in our annual Funky Fed Day.

“All of this helps to nurture a strong sense of communal responsibility and engender an understanding of the importance of giving to others,”

This was demonstrated recently when two Salford brothers, Aaron and Alex Colwyn, were surprised to spot their mum, Michelle, sitting in their school assembly.

The puzzled King David Primary School pupils were called up by Head of Jewish Studies, Mr Sammy Morhaim, to be presented with certificates from The Fed.

The cheery two-some, aged 9 and 8 respectively, received their awards in recognition of their help in packing customers’ shopping at Heaton Park Sainsbury’s. The Fed is the supermarket’s local charity of the year and money raised from regular packathons, at which they help, raises vital income for us.

“My parents, Sonia and Simon have been volunteering for The Fed for many years and were telling us they were going to help with bag-packing. The minute the boys heard about it they were desperate to go with.

It’s not every day that young kids want to get involved. They are very good-hearted boys.”

“Aaron and Alex are fabulous kids. I call them my little “Ant n Dec”. They really understand about doing things to help other people and the customers just love them!”

And now, existing links between The Fed and KD Primary are being further strengthened by a new joint intergenerational initiative. “Gemz”, devised by Mr. Morhaim and developed with Jennifer Berger, the Deputy Activity Team Manager at Heathlands Village, brings small groups of children to Heathlands Village every week. During pupils’ lunch-time, they come and “schmooze” with the residents. According to Mr. Morhaim,

“Gemz aims to give young children and the elderly an experience that will help to fill the generation gap.
Over the year all 56 pupils in year 5 will take part at least once.

My father-in-law, Josh Neumann, has long been involved in running the shul at Heathlands Village, and through him I began to take my own children there.

From a very young age they’ve been really at ease around older people and you can see how the interaction gives the residents such pleasure and, importantly, makes them feel significant.

This inspired me to bring the children I teach into contact with residents too. Giving to others is an essential part of their Jewish education and not something you can teach in the classroom.

They are learning that they can make a big difference to someone’s day by doing something very little.

The project helps to make the kids feel good about themselves – this can be especially important for those who struggle academically.

They were fascinated when one lady told them how from the age of 7 she would walk ten minutes to school on her own.”

Louie Anderson, who is seen here with Edna Nevitt, wrote about his visit:

“I would recommend my brother Sonny to go to Heathlands because I really think he would learn loads of interesting facts … and be able to chat to the older people which I really enjoyed.”

“He came home really excited. He was blown away and told me he wants to give up some of his own time to chat to or help the people who live there. I had an overwhelming sense of pride in him. Please G-d he will be able to continue this mitzvah.*” 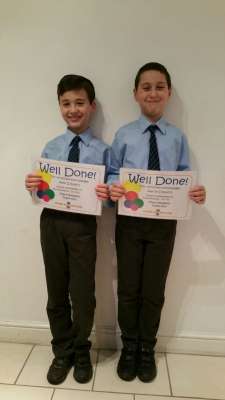 The Fed has always had a strong association with local Jewish schools…
Read More
We have suspended our community groups for both adults and children due to Lockdown 3. Our online Male Carers & Pilates groups continue as normal. For further info, advice or support please contact advice@thefed.org.uk or 0161 772 4800.
+