Huskies, Donkeys and Other Delights at our Summer Play-Scheme

Donkeys, huskies, cycling and ice cream have all been a part of this summer’s Play-scheme program at The Fed.

Just like in previous years, the Children’s Centre at Heathlands Village has offered a summer-long schedule of activities and day-trips for the children of our client families, and – in a fresh twist – some of the day-trips were offered to the wider community, resulting in two sold-out trips to Gullivers World and Blackpool Zoo!

School holidays can be a stressful time for families in need of support, and our play-schemes give the children a great time, while parents and carers have a well-earned break. 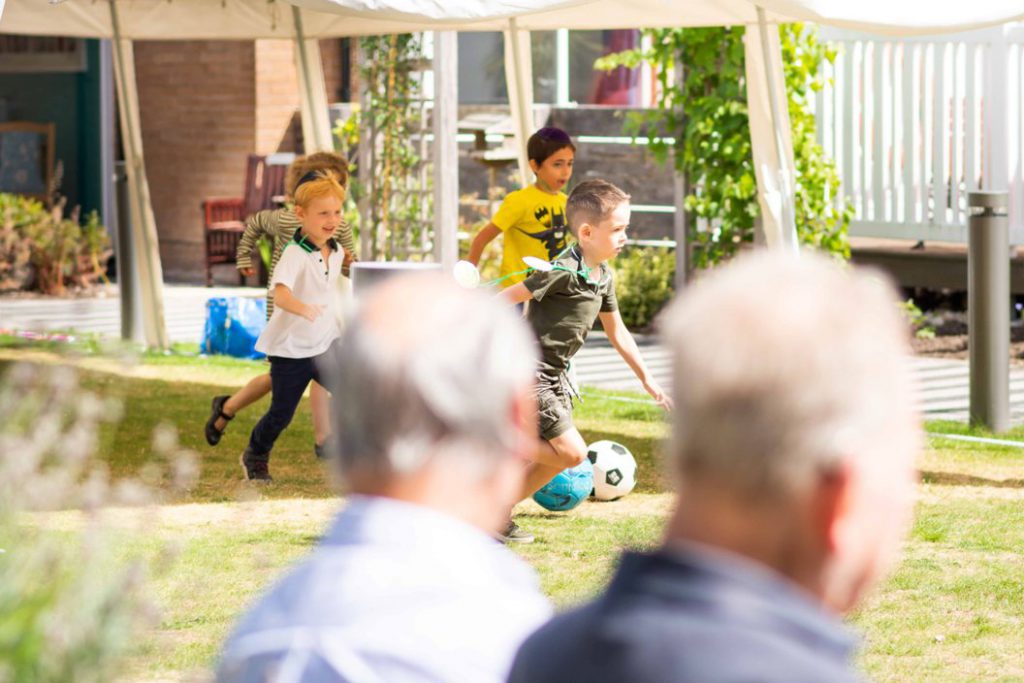 Beginning on 31st July, Fed staff in both Heathlands Village and the Children’s Centre created brilliant intergenerational activities to bring together some of the oldest and youngest people we care for, in an action-packed program that delighted both residents and children.

One highlight of the scheme was Sports Day in the garden, with residents acting as referees and judges for their younger athletic counterparts, and relatives standing by to hand out the winners medals!

Carol Booth, Children’s Centre Play Leader, said “This year’s play-scheme has been fantastic. We’ve been supported incredibly by volunteers and Fed staff from all departments – a real team effort. 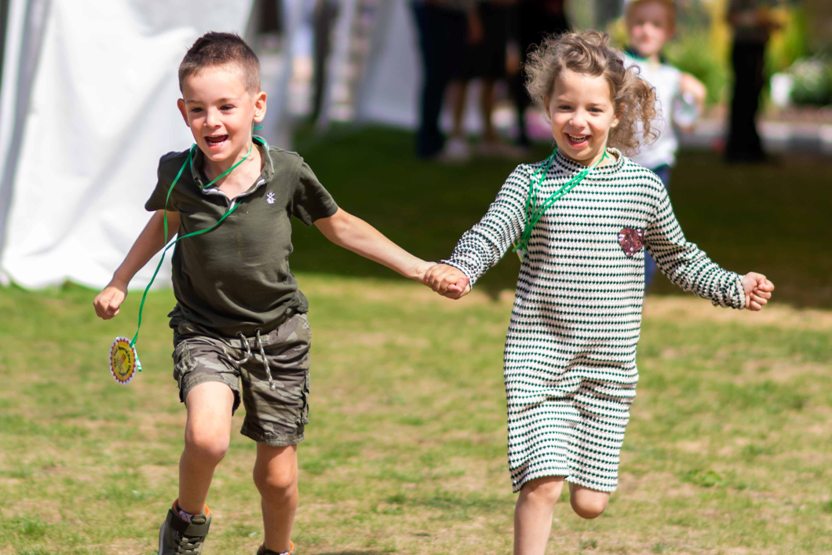 What has been so heartening and rewarding is seeing our children develop and have fun. Some of the children have difficulty socialising, and here they are running and skipping hand in hand, helping each other out; another – who is non-verbal – has been joining in with all the activities together with the group. They have had the time of their lives.”

Animals played a large part in the summer fun, too. Two gorgeous therapy dogs came to visit in August, and the children fell in love from the word go.

“One girl, who had never interacted with a dog before, was so smitten that she wanted to take him home!” said Carol. 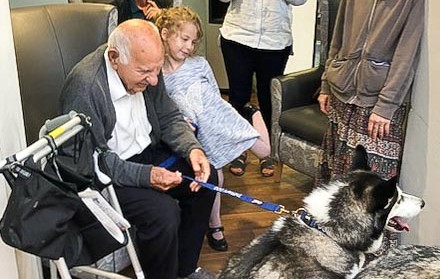 Tiffy Simons, who attended the Play-scheme, affectionately led her new friend around Heathlands Village, and delighted everyone by introducing the large, playful husky to resident Maurice Peppi. With over 90 years separating the two in age, the pair bonded over their shared joy of the animal – proving age really is just a number.

Following their introduction, the two canine visitors retreated to the outdoor play-area in the Children’s Centre, where they were showered with attention and love from their newest friends.

The huskies were followed in mid-August by Lingo and 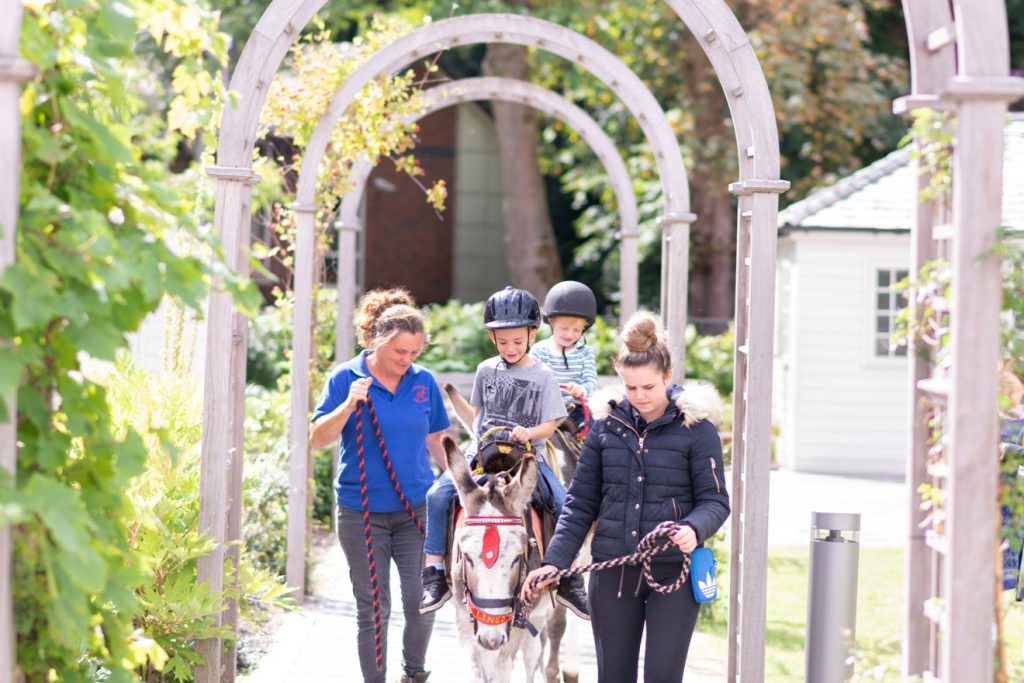 Maggie, two friendly donkeys who took the children on rides around the garden, while residents took turns petting their new attractions.

Day trips out to local farms and cycling activities were very popular, with one of the group enthusing “I had the best time! I love animals and we got to play with them up close!” A beach-themed day also went down a storm – who doesn’t love ice-cream, even without the blazing sun!

Two of the trips, to family favourite Gulliver’s World and Blackpool Zoo, were opened up to the community, with both selling out in a matter of days. A coach of 50 parents, children and siblings travelled on each occasion, to the delight of Fed staff.

“The idea of opening up some of the trips and activities to a wider audience was to enable families from across the spectrum of our community to have fun with The Fed, and see the facilities on offer at the Children’s Centre,” said Senior Practitioner Shelley Lewis, of The Fed’s CAST (Community Advice and Support Team).

The summer play-scheme culminated on 20th August with a Family Activity Day, held in the Children’s Centre. Offered to the entire community, more than 50 families descended on Heathlands Village, with biscuit decorating, games and arts and crafts on offer. The weather played its part and the Centre looked beautiful, decorated in bunting and flags inside and out.

The children who attend The Fed’s play-schemes benefit hugely from their experiences with our loving staff and spending time with their peers, but the effect on the wider family is so important too.

As one parent told us, “The staff and Play-scheme at The Fed has kept out family together – having this respite time has been a godsend.” 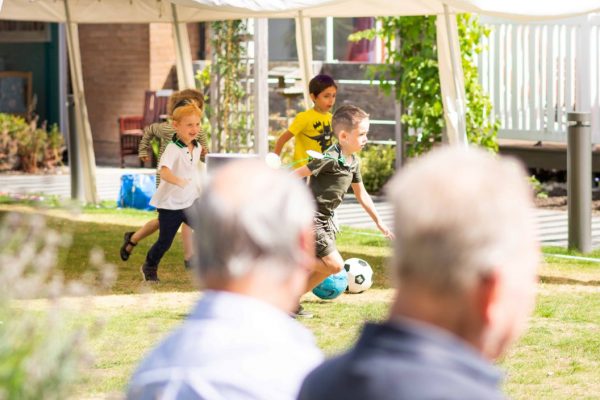 Donkeys, huskies, cycling and ice cream have all been a part of…
Read More