Residents’ Performance Is Highlight of Chanuka!

Song, dance, twinkling Chanukah lights and traditional delicacies all combined to bring the spirit of Chanukah to Heathlands Village.

But the stand-out event of the eight-day festival had to be a Chanukah concert performed by residents for residents in the Prestwich care home’s Memorial Hall. 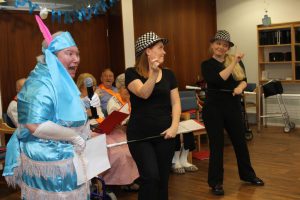 ar, with costumes sewn by Activity Team member Karon Anderson especially for the occasion, an audience of residents and families were treated to a medley of songs from the musicals.

Second Hand Rose was sung by Daphne Levine, performed in a flapper costume and Thank Heaven for Little Girlsæby Sol Gicht, along with recitals, choral and dance numbers, including Penny Arcade and the Locomotion. Accompanying the residents were “backing group” and “chorus-girls” Donna Gallagher and Elaine Connolly.

“We formed a residents’ choir in October with holding a Chanukah concert in mind – the first time ever we’ve put something on by residents, for residents. The response was terrific. It made them feel like celebrities. Afterwards the “cast” got together for afternoon tea and they couldn’t stop singing!

Now they have plans for more concerts and a lot of new people have signed up.

The feedback from other residents, staff members and families was amazing. People were so moved to see how much talent there is amongst our residents and how much fun they had giving joy to other people.”

Also included in the festival programme was a holiday tea-dance with professional dancers Amy and Alex, and a visit from a local school choir who sang traditional Chanukah songs.

Many users of The Fed’s community services, from both north and south Manchester, also joined in the fun with a special party at The Fed’s Purple Room Community Centre at Heathlands Village, with the blessings for lighting of the menorah, special eight-branched candelabra, sung by local synagogue cantor Zevi Neumann. Guests joined in with the singing, before turning their attention to a game of Chanukah bingo, followed by a delicious meal.

The Fed’s The Drop-In, which supports people with mental health and emotional difficulties or who are socially isolated, also welcomed its members to a special Chanukah-themed event. Much singing and celebrating was enjoyed, before another wonderful meal provided by Heathlands Village’s catering team. 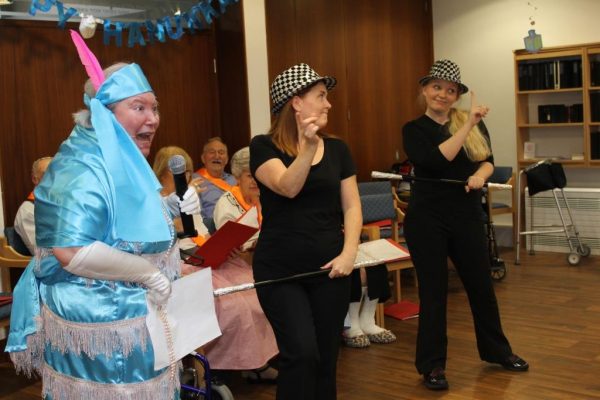 Song, dance, twinkling Chanukah lights and traditional delicacies all combined to bring…
Read More
Our "LUNCH IS NOT A LUXURY CAMPAIGN" is now closed! Our target was reached in 36 HOURS! Thank you to our incredible Manchester community for your response!
+