The new Mayor of Bury, Jane Black, joined donors, residents and families on 26 June for the celebratory launch of an innovative residential household for people living with dementia. The state-of-the-art facility is based at Heathlands Village, a care home run by Prestwich-based charity The Fed.

Cutting the ribbon Ms Black – who has selected The 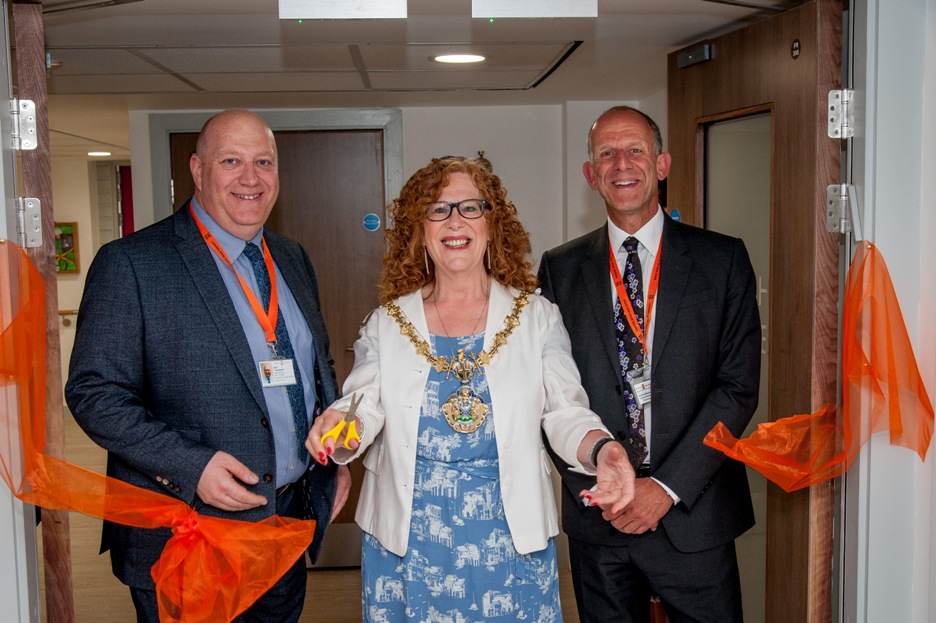 Fed as one of her two main chosen charities of the year – told guests that picking them æïwas a no-brainer’.

The £1.5m refurbishment has been funded through the generosity of Manchester donors, and provides a 20-bed home for vulnerable older people living with what is often a devastating condition.

The Fed’s CEO, Mark Cunningham, remarked on the foresight of the home’s original trustees, which has been emulated by its current leadership.

“They wanted to provide a care home for this community. Heathlands Village has always evolved and been at the forefront of care provision.”

Personally addressing Hertzl Hamburger and Leslie Kaye – former and current trustees respectively – he continued, “I hope you feel we have built upon the legacy that you helped create for the community.”

Leslie will be awarded the British Empire Medal later this year in recognition of his many decades of communal service. 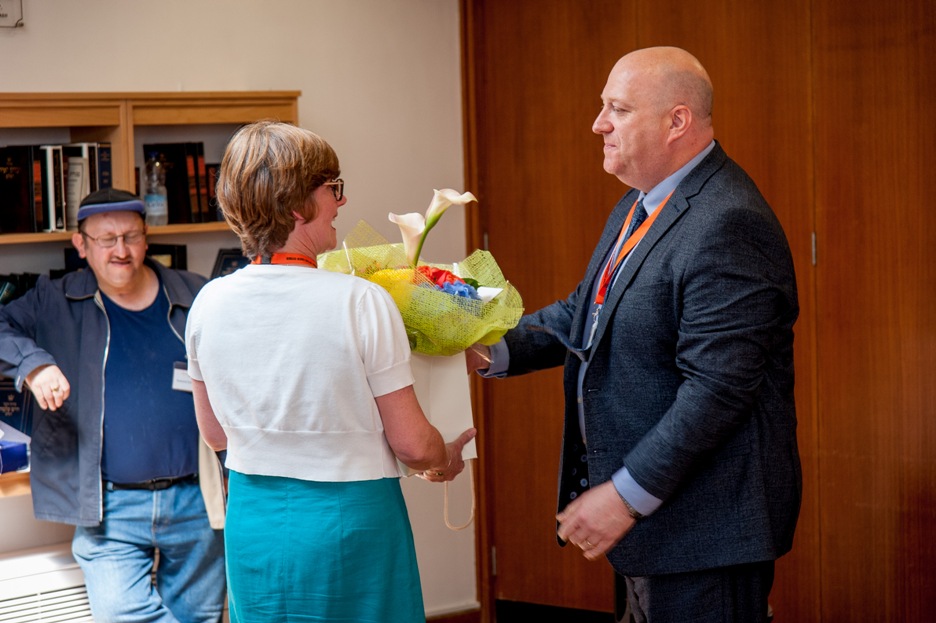 Mark went on to thank senior management, singling out Director of Operations Sheila Heywood-Holt who had overseen the entire project, as well as Fed Chairman Mark Adlestone, OBE DL, and the board of trustees for “sticking with the plan” first conceived in 2010.

A special mention went to former CEO, Karen Phillips MBE DL, who championed the project shortly after The Fed’s merger with Heathlands Village in 2009.

“The new gardens, the Central Cafe, activity centre, atrium and shop; the new two-way reception, the hairdresser’s, the medical suite, Oakwood – our dementia nursing unit with its woodland garden; the Purple Room community centre; the community care team officesæ and Children’s Centre…..If you say it quickly it doesn’t sound like much but it amounts to eight years’ hard work.

“What does it mean? It means better care and a better place to live for the most vulnerable people in our community. As we live longer, more people are affected by dementia. It is a cruel disease that steals people’s most prized possessions – their memories.

We believe what we are creating at Heathlands Village is part of the answer: a communal hub where people carry on living; a place where relatives and children want to come and stay and in many cases, play; a happy place where people feel safe, fulfilled and loved.”

Mark thanked the charity’s donors who had made the refurbishment possible:

“Without your support we couldn’t have done it. It is that simple!”

“Together I think we have created one of the best care homes in the country…on behalf of the many residents, both now and in the future, that this project will care for…thank you.”

Marketing and Communications Manager, Joyce Khan, describes just some of the novel design and technological features aimed to enhance people’s wellbeing and independence. 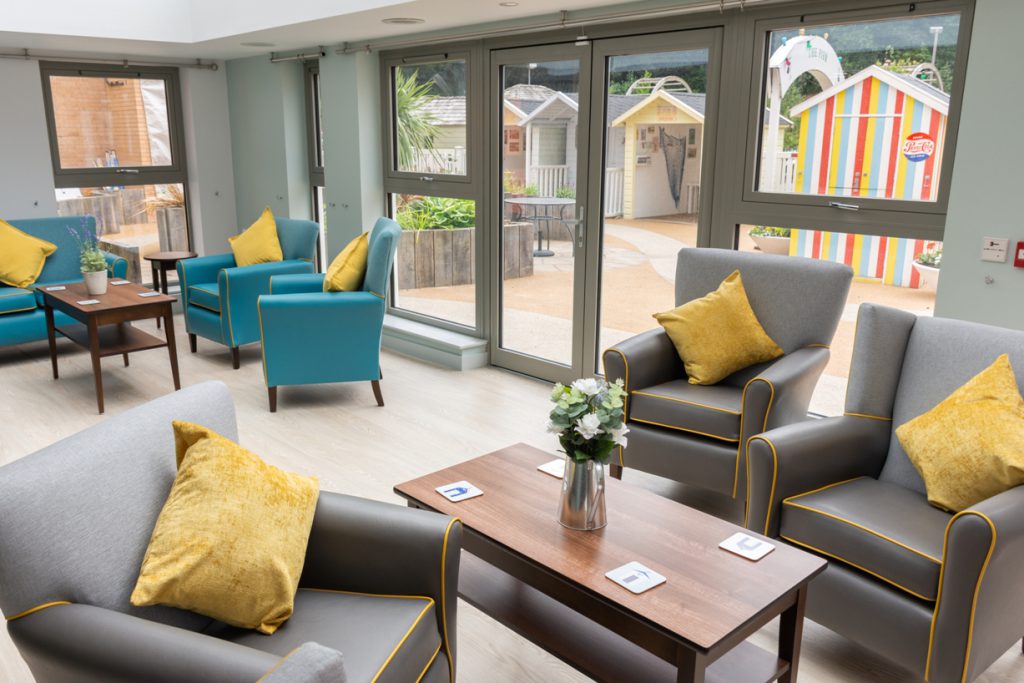 “We’ve brought the theme of

Seaside sensory garden indoors, creating a bright and uplifting environment.æ People with dementia can often live very much in the past. The beach theme aims to stimulate positive memories of trips to the seaside and family holidays, either growing up or in young adult life.”

The flowing layout enables residents to wander out through one door and in through another, helping to reduce agitation and providing a sense of a purpose.

In the bedrooms, over-the-bed sensors trigger automatic lighting if a resident gets up in the night to use the toilet, and help guide them back.

Furniture has been designed with open sections so the contents can be seen to help people identify locate their clothing and other belongings. 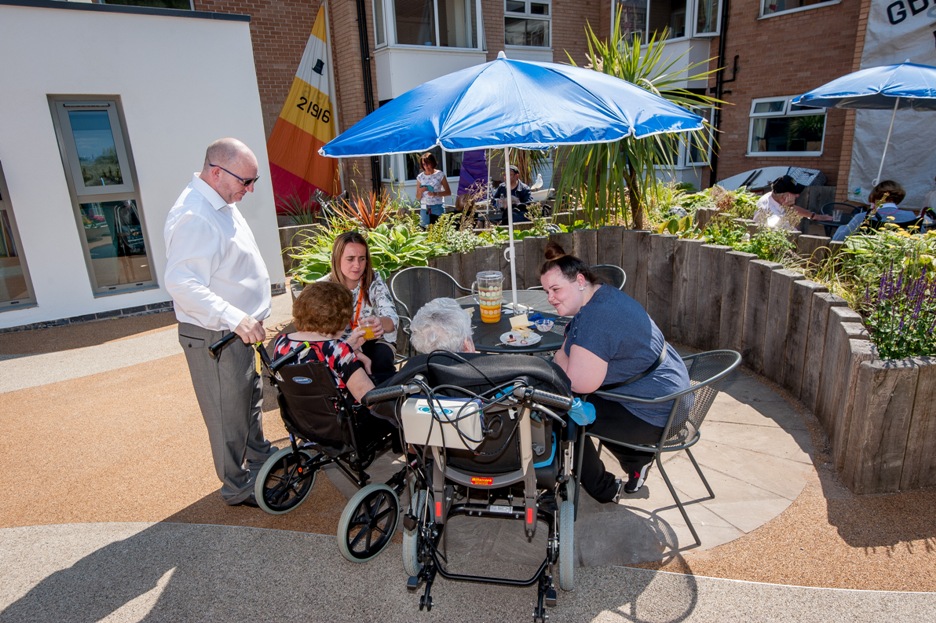 Recessed front doors create a greater sense of space and are each a painted different colours, with large

clear numbering, and individual memory boxes by the doors with photos of family, friends and personal memorabilia – all helping people to identify their own room.

And staff are piloting the use of handheld devices which enable them to update people’s care records on the go. This should drastically reduce time spent on the computer and increase that spent giving people individual attention. 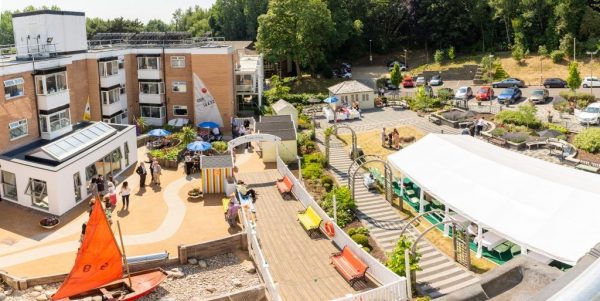 Change Is In The Air

The new Mayor of Bury, Jane Black, joined donors, residents and families…
Read More
We have suspended our community groups for both adults and children due to Lockdown 3. Our online Male Carers & Pilates groups continue as normal. For further info, advice or support please contact advice@thefed.org.uk or 0161 772 4800.
+