Music Therapy at The Fed – reaching the well person within

A music therapy project which benefits residents of our care home atæ Heathlands Village, will sadly end soon if further funding is not found.æ The therapy for people in the later stages of dementia, will finish at the end of this month.

The current funding was partly provided by the BRIT Trust (British Record Industry Trust) and partly through funds money raised by a group of local women. They held fundraising events in memory of their friend, Joy Cainer, who was a former President of Heathlands Village.

The music project brings specialists from national charity, Nordoff Robbins, to provide regular therapy sessions for residents who are most ïhard to reach’, due to the severity of their illnesses.

David Robinson, who heads up the charity’s North West and North Wales team, explains how the therapy brings both immediate and longer term benefits:

“Music is a universal human means of communication that transcends language and memory. In therapy we use it to find and draw out the healthy, well part of the person, enabling them to connect with others and helping to maintain or even enhance social skills that may fade as illness progresses.

People with dementia lose their autonomy. As the illness progresses, their increasing experience is to have things done for them as they are less able to look after themselves. Our sessions give them the opportunity to be spontaneous and to take the lead.

For people who are inevitably declining in their overall health, we can see benefits, even longer-lasting benefits, with positive effects on depression, anxiety and withdrawn behaviour.

Even though the prime beneficiary is the person with dementia, there are clear benefits for relatives. They get a great deal of comfort from the films we make of the sessions and the positive changes in behaviour, such as increased eye contact and speech.

Staff caring for people also gain greater insight into how to meet their needs.

Further funding would also allow us to involve relatives more in therapy sessions and to help staff develop their understanding and skills so they can make more effective use of music outside of therapy sessions.”

The following case studies illustrate how the therapy has helped people living at Heathlands Village:

98 year old Mona has advanced dementia. She sleeps much of the day and has long since lost the power of speech.

She is dozing in a chair, her swollen legs covered by a colourful crocheted blanket. A strange sort of song is being sung to her. “Mo, mo, mo…mo, mo, mo….mo, mo, mo – Mo!!” sounding the first syllable of her name, repeating the phrase, changing tone, at times soft and gentle, at others insistent, altering rhythm, volume, key, patiently repeating and re-offering the moment to engage.

At last she rouses and turns towards music therapist, David Robinson, smiles and laughs at him, sitting close to her at his keyboard. “Oh” she says, in a manner that signifies happy surprise and recognition.

His song continues, using her full name now, repeating it and greeting her back into the world: “Hello Mona! Hello Mona! ….helloooooooo!”- his voice deep and resonant.

He leans in towards her, looks directly at her and smiles warmly in a way that says “I’m so delighted to see you again!” all the while, one hand playing his improvised accompaniment, whilst the other taps the beat lightly on the back of her hand. Then, as she is drawn out she “la la la’s..” her own song and he follows her lead, adapting his playing and voice to her tune.

This combination of touch, facial expression, music and the human voice is used by therapists to ïbring the person into music’.
Staff have commented, “Mona is so much more alert after music therapy sessions.” Video extracts showing her enjoyment and engagement have been shared with her son.

Sonia Fahey is the energetic enthusiastic team leader of the second floor of Eventhall House. She and her dedicated team care for 20 residents with advanced dementia. She sees first-hand the benefit of David’s work. She talks about Linda*:

“She’s one of my youngest residents – she’s only about 70. She’s always been very communicative and affectionate and loved dancing, but last year all that changed. She virtually stopped speaking; wouldn’t make eye-contact and stopped feeding herself. She was “on lock-down” and it was heart-breaking.

We were totally at a loss as to how to reach her. I felt we were failing in looking after her. I did loads of research and we tried all sorts of ways to get her to engage with us – art therapy, doll therapy and music.

The only time we saw a glimmer of a response was when we took her along to the weekly dance nights. She would tap her feet. But try as we might, back home in our lounge when we put music on, nine times out of ten we couldn’t replicate that reaction.

When David came along from Nordoff Robbins six months ago to provide music therapy for residents, Linda was the first person I wanted him to work with. For the first couple of weeks we didn’t see any difference in her but then he managed to find the key and unlocked her.

In the week following her third session she began to say a few words like “yes” and “no” and began to look at us again. Her son was feeding her one day and talking to her and she lifted her face up to him.

Her verbal communication still isn’t good but she can tell us what she wants more than before. She puts her hand out to us have it held and when members of staff are seeing to her personal care she puts her arms out for a hug and really hugs back.

The therapy has opened her up so she can to let us know when she wants affection and her well-being has improved because of this.
She looks at us directly; she holds us; she laughs and smiles and when we walk with her she stops and looks at things. Her curiosity has come back.

I can’t believe how powerful this type of therapy can be. It would be tragic if we can’t continue with this work due to lack of funding.”

Julia is 95 years old, and lives in the Special Care Dementia Unit at Eventhall House. She retains her ability to use and understand language, but her memory is severely affected and she suffers distressing hallucinations and acute anxiety.

David reports, “At the start of each therapy session she is very frightened, anxiously asking me who I am; where she is going and what we are doing?”

But by patiently and skilfully drawing her into the music and helping her to reconnect when her attention drifts, David helps her become “immersed in making music together” singing songs from musicals.

As she sings her fears are temporarily forgotten, the therapy providing respite from the state of distress and anxiety that sadly characterises her daily experience.

*Residents’ names have been changed for the purpose of this article. 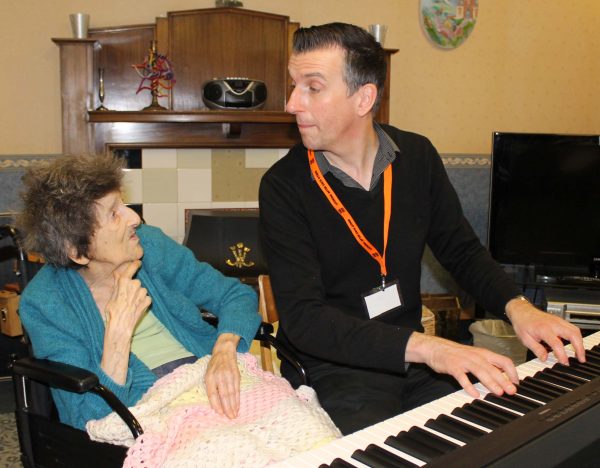 Honoured In the Presence of Honours-List Survivors