The Fed takes on the Big One

Four teams of intrepid climbers harnessed their courage and suppressed their jitters, to scale on foot to the top of Blackpool’s iconic roller-coaster, The Big One, in aid of Prestwich-based social care charity, The Fed on Sunday (11 October 2015).

Opened in 1994, the ride was the tallest and steepest in the world and though outstripped by its competitors, held the European record until 2002. Reaching 213 feet (65æm .) above ground level at its apex, it is still the highest in the UK.

The 24 Fed fundraisers who “walked The Big One” have raised over £10,000 for the charity, according to Fundraising Manager, Rochelle Broman.

“The event really captured people’s interest and we sold most of our places within the first week and had to turn a lot of people away. But we plan to do it again in 2016”, adding mysteriously, “and with an added twist”.

47 year old dispatch manager, Joanne Orr, of Bury, was in the team who made the climb at 7.00pm.

“I signed up after seeing the event advertised on The Fed’s facebook page. My Grandma Sally, who’s a 102, is looked after in their care home at Heathlands Village. I like to do something for charity every year – usually a walk – but this year having lost a huge amount of weight, my confidence has grown and a belief that I can do anything – including overcoming my terror of heights!

I was very anxious before the climb – my husband said he’s never known me be so quiet which is very unusual for me! Half way through I starting really panicking but my team-mates and the support staff really helped me and got me to breathe calmly and cope with my nerves.

Being at the top was so emotional. I filled up. I just felt so great and the view of the illuminations was just spectacular.

If anyone is thinking of doing it next year, and is afraid of heights like me, I would really encourage them – The Fed staff and the people running the event are fantastic – the support and organisation is excellent. There’s nothing you can’t do!

I’ve already raised over four times my target and am now hoping to hit £1,000.” 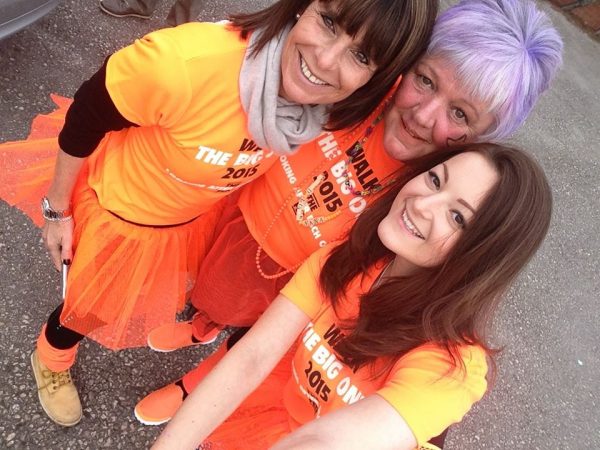