Just before Shavuos, North Cheshire Jewish primary school Year 6 pupils hosted a group of special visitors who they had invited round for afternoon tea.

More than 30 of The Fed’s south Manchester “coffee-stop” regulars,æ accompanied by 12 volunteers dropped into the school hall.æ There they were treated to a variety show followed by sandwiches and cakes which the students had prepared and baked themselves.
Head teacher Michael Woolf told us after the event:

We were delighted to be able to host The Fed coffee stop which has become an institution at the school.

It was a wonderful occasion and the children not only baked and entertained but also welcomed guests, served drinks and cakes, engaged in conversation with our visitors and set up and tidied up the room. In fact they led the whole afternoon from start to finish and are a real credit to the school.

Anyone living south of the city who would like to come along to a coffee-stop should get in touch with our south Manchester team on 0161 941 4442. Monthly coffee-stops are also held in north Manchester. The contact number for these is 0161 772 4800 (option 2) asking for the Time For You team.

If you are interested in volunteering for The Fed by helping at our coffee-stops or in some other capacity, call Dalia Kauffman on 0161 772 4800 (option 2). 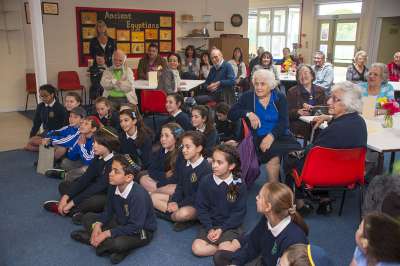 ‘Back together again’ – Community Groups meet up for a stroll

Just before Shavuos, North Cheshire Jewish primary school Year 6 pupils hosted…
Read More
We have suspended our community groups for both adults and children due to Lockdown 3. Our online Male Carers & Pilates groups continue as normal. For further info, advice or support please contact advice@thefed.org.uk or 0161 772 4800.
+